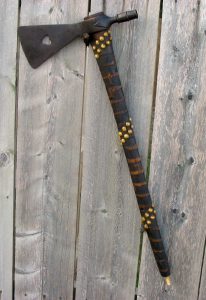 During the Plains period, tomahawks took on a different shape. The blades of the Plains Indian pipe tomahawk were wider and the heads were longer. The eyes became smaller as well as the bowls and piercings became a favorite among the Indians. Native Americans were the primary owners of these iconic weapons.

Handles tended to be long and thin for use on horseback. Decorations were different than the Eastern tomahawks; file branding with tacks, brass and copper wire and even carvings were favorites. Another decoration favorite of these pipe tomahawks in the Plain style were beaded and porcupine quilled drops added to the smoking end of the handle. This Plains Indian pierced pipe tomahawk takes on a number of these characteristics; bowl being long and thin, blade is wide and long in length with a weeping heart piercing. The handle, also in the Plains style, has been file branded with brass round headed tacks added as decoration.

You can also read more about pipe tomahawks among others in wiki too.